Revised is the key word here. We are seeing an impressive upswing in the number of position switch problems brought to our attention. This has led us to take a closer look at the system, and to update our thinking and share our findings in this document.

This writeup pertains to AutoPark systems installed from about mid 1994 to mid 1998. This is what we normally refer to as “Version II” AutoPark.

The Version II coaches have a manually applied foot pedal that can apply the parking brake, as well as the AutoPark system which is connected to the gear shift lever – – i.e. PARK position on the shift lever.

THE PROBLEM: For several years, we have been hearing about a problem that involves shifting from PARK to REVERSE – – When the shift lever is moved out of PARK, the AutoPark system is supposed to release the parking brake, and allow the coach to roll. However, it turns out that the switching mechanism that makes this possible (known as the “the gear shift lever position switch”), does not always accurately sense the shift lever position. When this happens, the parking brake will NOT release even though the shift lever has been pulled into the REVERSE position. Additionally, most of the reports say that the problem is worse with a hot engine and/or hot weather. The reports further suggest that waiting for things to cool off, and wiggling the shift lever around will usually allow the system to release so the coach WILL move when placed in REVERSE.

When these problems first started showing up here at the AutoPark Library (maybe 5 years ago), we would tend to primarily blame them on improper adjustment of the position switch, and we attached less importance to the switch/cam assembly lubrication. With the passing of time however, we have come to believe that most of the problems are more likely linked to the lubrication rather than the adjustment. Without question we can say that time, mileage, and weather are the culprits leading to the performance degradation of this switch assembly. Many people report that there is little or no grease left on any of the parts when inspected.

As it turns out, the lubrication process can be accomplished without a lot of preparation work. While a bit awkward, the switch can be reached by laying in front of the left front wheel, and reaching up to the switch. Adjustment of the switch however, requires removal of the left front wheel and removal of the splash panel between the wheel well and the engine compartment – – quite a bit of additional effort.

Soooo – – Our present recommendation is to try the lubrication first. If that does NOT cure the problem, then the adjustment procedure will probably be necessary.

Here is what the switch looks like, and the points of required lubrication are noted: 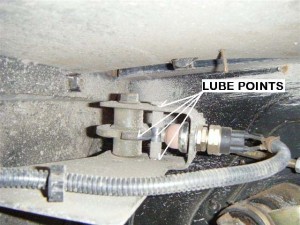 Another view of the switch – – in this case on the bench top: 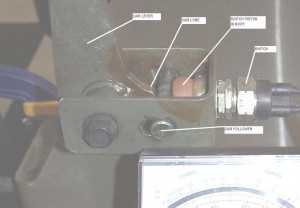 The above close-up is maybe more useful in understanding how the cam/switch actually works in practice:

The cam lever is attached with linkage rods to the gear shift lever mechanism.

When the shift lever is moved by the driver, the cam lever also moves. In turn, the face of the cam bears upon the cam follower rod – – shown in the picture. The follower rod, depending on the position of the cam and cam lever, either opens or closes the switch itself. Basically, whenever the shift lever is moved to ANY position other than PARK, then the switch should be closed and this allows the parking brake to be RELEASED.

BUT, unless the cam/switch is accurately synchronized with the gear shift lever, the switch may NOT be closed when the shift lever is pulled into REVERSE – – thus causing the brake to NOT release and keeping the parking brake applied in reverse gear.

FIXING THE PROBLEM: As stated above, we’ve begun to think that the lubrication may be more important than the adjustment. Since the lubrication process requires no disassembly it is the much easier task of the two.

A question of agility: Some people say that from a position of laying on their backs, with their head in front of the left front tire, they can look pretty much straight up and see the position switch – – but they can’t quite reach it. Others have said they CAN reach the switch by stretching.

This suggests two different approaches to get the assembly well greased.

1. If you can’t quite reach the switch, you could take a small paint brush and duct tape it to a stick – – providing the needed extra reach. Get the brush liberally smeared up with a sticky grease like LubriPlate. Reach up in there and goober the grease all over the switch cam, both ends of the cam follower, and the center portion of the cam follower. Studying the pictures first may aid you in this process.

2. A second approach for those with the longer arms and more agility, would be to put on some latex gloves, and daub the grease on with your fingers. This might have the advantage of being able to feel the various components of the cam/switch as you smear the grease in and around the assembly. The switch itself is quite well sealed and you don’t need to worry about getting grease INSIDE the switch.

As an added supplement to the above write-up, I’ll separately send you several other pictures and pieces of information. There will be some duplication of content in this info, but they may still be worth looking at. Included will be some information on the adjustment process – – should that turn out to be necessary.

If the thorough lube job does NOT cure the shifting problem, let me know and we’ll go thru the adjustment process.