The following writeups and pictures have been packaged to cover the diagnosis and if necessary, the replacement of a failed Rotten Green Switch – – aka the pump motor switch or RGS. Since these memos were written to send out individually in most cases, there may be some duplication in content.

Failure of the RGS accounts for a large majority of AutoPark system malfunctions. This specific writeup is intended to address the troubleshooting and replacement of that switch. The outlined procedures have been found to be within the capability of most owners or shadetree/DIY mechanics, who have some basic understanding of mechanical equipment and a willingness to do some fairly straightforward “wrenching.”

Before we get into the specifics of the components, or diagnosis and repair, it may help to get some basic understanding of how AutoPark works. The following illustration describes the system in pretty simple terms. We suggest studying these diagrams and text, so as to be able to visualize what your AutoPark is doing as you apply, or release the parking brake. Be advised that there are several different “morphs” or versions of the system and components, but the diagrams show the basics that are common to all the AutoParks built from about 1989 thru present.

Interestingly, all the AutoParks built from 1989 up thru about 1994, were driven by pressure from the power steering pump instead of the separate electric pump that characterizes all the later units. These earlier units were primarily an all hydraulic device and for the most part, have proven to be perhaps more reliable than the later electro-hydraulic types.
The following page illustrates the basic operation of the actuator, which is essentially the “heart” of the AutoPark system. 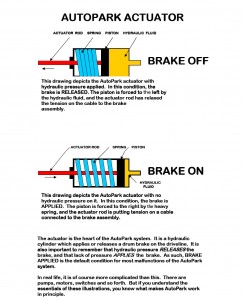 In addition to the actuator system which is illustrated and described above, the newer systems have a high pressure hydraulic pump that is motor driven and controlled by a combination of electronic and hydraulic devices.

There are actually two somewhat differently configured systems in existence – – One of them used from about 1994 to 1998, and the other from 1998 thru 2007.
Diagrams of each system are shown below: 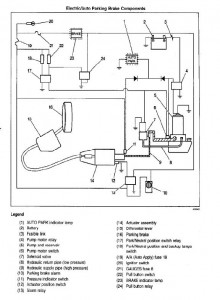 This is what we call Version II of the AutoPark system. The parking brake with this configuration may be applied by putting the gear shift lever in PARK, or by depressing the manual foot pedal #2. 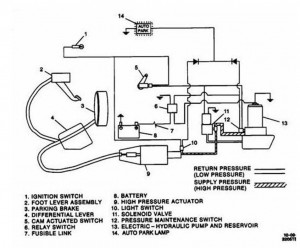 This second diagram shows the Version III system. It does NOT have the manual foot pedal, but instead has a yellow push-pull knob on the dashboard as well as the PARK position on the gear selector.

So what is the Rotten Green Switch, and what does it do? The RGS is an electric pressure switch, which controls the hydraulic pressure supplied to the actuator. It is designed to turn on the pump at pressures below 1200 psi, and turn the pump off when the pressure reaches 1600 psi.

This switch typically fails in two stages. In the first stage, oil under high pressure from the pump, gets inside the switch and causes the switch to lock in the ON position. With the switch staying ON, the system pressure then goes sky high. The very high pressure at some point ruptures the switch, and oil starts trickling out past the switch terminals. Eventually, all the oil will leak out and the actuator will apply the parking brake for lack of hydraulic pressure. 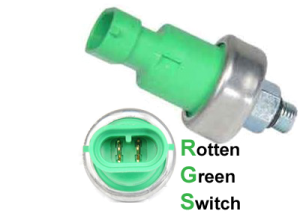 On the left is a picture of a new Rotten Green Switch – – as mentioned elsewhere, it is sometimes brown in color, but the function is unchanged regardless of whether it is brown or green.

The above information pretty well covered what the RGS is, how it works, and where to find it. Below, we have inserted the writeup which describes the method used for determining failure of the RGS.

This is a pretty simple test to CONFIRM failure of the RGS (Rotten Green Switch). The proper name for this item is the “Pump motor Switch.”

Typically, units built from about 1994 thru 1998 will have this green switch but some of the newer models may have a brown switch – – basically the same switch, just a different color.

Chock your wheels – – you’ll be getting under the rig unless it is a 2001 or later in which case the pump/reservoir and RGS are up in the front of the coach – – driver’s side by the radiator. On earlier models, look on the passenger side of the transmission next to the frame rail, but slightly aft of the tranny itself. You should see the reservoir easily, but will probably have to remove a sheet metal plate to see the AutoPark mechanism and the RGS. It looks like this: 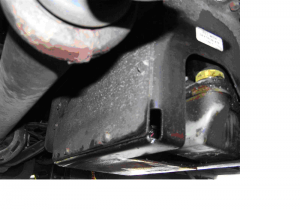 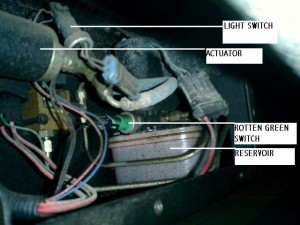 With the lid removed, the Goodie Box will look much like    this inside. This particular picture is of a 95 version. If you have the later version with the pump located up front under the utility hood to the driver’s side of the radiator, it will look more like this:
Click on image to enlarge 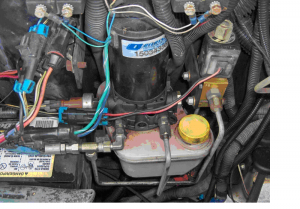 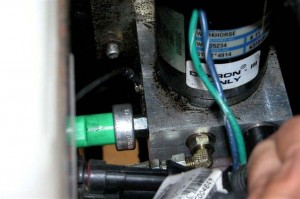 Notice that the newer version (of the Parker pump) has a Rotten Brown Switch instead of a Rotten Green Switch. If your pump does NOT look like the first picture, you may have the Pump/motor that is made by MTE – – (above picture). Both the Oildyne and the MTE perform the same functions.

For the test itself:

Here is a picture of a leaking/oily RGS:
Click on image to enlarge 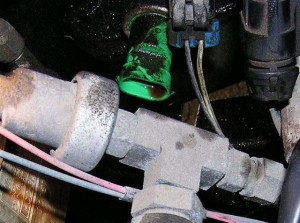 Even if the RGS is NOT OILY, you will still want to remove the electrical connector from it. If AutoPark lite GOES OFF after disconnecting the plug on the RGS (ignition still ON), then you have confirmed that the RGS is bad.

The RGS threads into a piece that looks somewhat like a hex pipe reducer. It is made of shiny soft aluminum. One side of this reducer has a 3/8 – 24 female thread into which the RGS screws. The other (male) end screws into the pump body itself. Several people have said that they stripped the female thread in the process of installing the new RGS, and have thus found it necessary to drill out the old threads, and re-tap the hole to something larger. Then, they made a new threaded bushing to fit the RGS on one end, and to fit the hex adapter on the other. The other obvious approach would be to buy a new hex adapter. We can provide source information on that if needed.

There is another potential problem in installation of the RGS. The adapter, described above as looking somewhat like a pipe reducer, retains a very important spring and poppet valve. If the adapter/reducer is taken out along with the RGS, it is really easy to lose the spring without even knowing it. Without the spring, the poppet will oscillate rapidly back and forth – – producing a rapid chattering of the pump, and a fast blinking AutoPark lite.

Consequently, anyone replacing an RGS should be aware of the potential problems. For whatever reason this hex valve fitting may be removed, the mechanic must be careful not to lose any of the parts of the poppet assembly. We do have an annotated picture of the system that shows and labels the RGS and the hex reducer. We also have (courtesy of the pump manufacturer), exploded views of the poppet assembly and corresponding part numbers, just in case someone should lose any of these pieces. The obvious way to avoid these miseries is to remove ONLY the RGS and NOT the hex reducer which retains the poppet assembly.
Anyone who encounters the rapid on/off cycling of the pump should suspect loss or malfunction of this poppet assembly. Let us know if you need further information on this subject.

The below pair of pictures on the following page that help to explain the above problem. In the picture below, it is important to note that the shiny hex adapter is made of very soft material, and it is pretty easy to strip the threads by over tightening the RGS when threading it into the adapter. 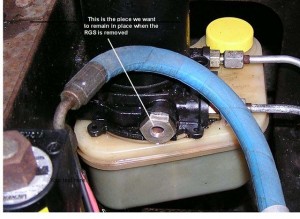 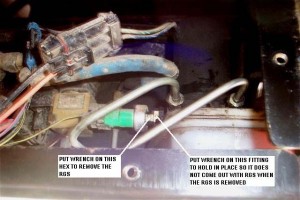 Here is an online source for the RGS – – aka the pump motor switch. This source is reported to be a helpful place for other GM parts as well. The GM part number is 15961566. It is stamped on the case. You can order it online at: http://www.gm-auto-parts.com/, I’m told that Amazon has the better pricing

With the above part number, you should also be able to go to a decent auto parts store like NAPA or CarQuest, and have them order it on an overnight basis. They may need to know that this is a GM part number so they can do a cross-reference.

We realize that the above information covers a lot of ground. They are a collection of several individually written memos, so they will have some duplication of content as well.