What we will try to do here, is to include all of the information we have on bleeding the Hydroboost system (brake booster), the power steering system, and the AutoPark system.  All three systems run off of the power steering pump.  These procedures are especially important when you are cleaning up after over travel issues.  As long as there is foam and air in the system, it will whine and make weird noises.  Additionally, the brakes may be spongy and the power steering and AutoPark may not work properly.  BLEEDING IS VERY IMPORTANT and it may take more than one session of it to get the air out of the nooks and crannies of the system.

Most of the following is stuff we have lifted from manuals and such – – There will very likely be some duplications of content between the various write-ups. 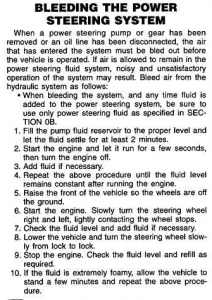 The following pertains to bleeding the actuator – – There is a port on the top, back end of the actuator for this purpose. 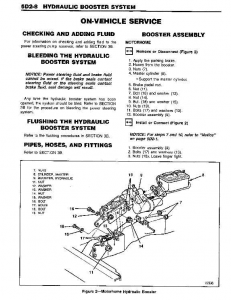 Of the three procedures listed above, bleeding the power steering is probably the most productive.  Foam in the system will migrate as the brakes, power steering and AutoPark are used.  There may be bubbles trapped in the three different sub-systems though, making it necessary to bleed those sub-systems individually.

As mentioned earlier, this is one of the most tedious procedures one will encounter in AutoPark repair.  It is not at all unusual to have to repeat some of the bleeds more than once.

If you find that the system becomes noisy after cycling the AutoPark by putting the shift lever out of PARK with the engine running, that is a sign that you have still NOT cured your problems with OVERTRAVEL.  As long as you have an over travel issue, the system will ingest air EVERY TIME you cycle the AutoPark.